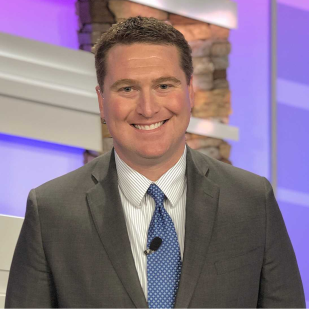 For nearly two decades, Garrett Lewis has served our area as the Chief Meteorologist at 5NEWS and has led our community through the extremes of all seasons.

“The weather in Arkansas is unbelievably varied. We have 2″ ice storms that cause month long power outages, tornadoes with winds nearing 200mph, floods that devastate entire towns, heat waves with temperatures as hot as 115º, cold outbreaks as low as -15º, snowstorms with two feet of snow… the extremes we experience are astounding.”

He holds a B.S. Degree in Geosciences and an M.S. Degree in Applied Meteorology Mississippi State University. His graduate work focused on the social science applications in severe weather. In addition, he has been awarded both the National Weather Association and American Meteorological Society’s Seal of Approval.

A native of Alma, Arkansas, Garrett now lives in Rogers with his wife Ashley and two children.