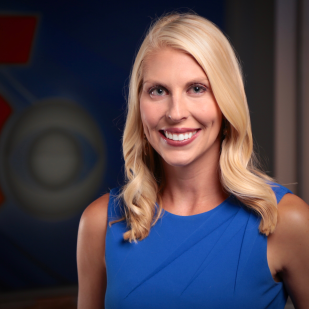 Laura Simon is a morning anchor with a zest for life, adventure and spreading positivity. She joined the 5NEWS team in 2014.

Prior to KFSM, Laura was an anchor/reporter at KTVO in the Ottumwa, Iowa/Kirksville, Missouri area.

She was born and raised in a suburb of St. Louis. A high school journalism class inspired Laura to pursue a broadcast journalism degree at Columbia College Chicago, where she graduated with a 3.9 GPA.

During her time at Columbia, Laura got a highly competitive internship at NBC Chicago in her sophomore year where she was able to shadow reporters, anchors, producers and TV executives. That’s where she fell in love with news. She also anchored and produced a weekly live newscast for her school, which aired on a Chicago cable network. During her junior year, Laura was nominated for a student Chicago/Midwest Emmy Award for a piece she did on Mayor Richard M. Daley’s two decades in office. Her greatest mentor was Sam Roe, an investigative reporter for the Chicago Tribune. In a class project, she conducted a deep dive investigative report on a questionable Chicago police shooting. She interviewed a key player in the shooting who had not been interviewed by police detectives or other media outlets before.

In her free time, Laura loves hanging out with her husband Phillip, exploring the beautiful trails around Arkansas, working out, trying new restaurants, attending Razorback games and watching documentaries.